Recent trends in the meetings industry clearly indicate that both the organisers of meetings and events and the participants are placing increasing importance on the issues of ecology and sustainability, taking active steps to reduce CO2 emissions, reduce waste and obtain independent certification. The 61st ICCA Congress in Krakow is a prime example of this.

Five years ago, Aleja Kongresowa [Congress Avenue] was created thanks to a joint initiative by the City of Krakow, the Krakow Festival Office – operator of the ICE Krakow Congress Centre (now Krakow 5020) – and the Board of Urban Greenery in Krakow. The first tree was planted in Congress Avenue in 2017, during the 41st session of the UNESCO World Heritage Committee, while the 36th tree was planted, with a commemorative plaque, to mark the ICCA Congress in Krakow.

The ceremony, which took place on the morning of  6 November, was attended by representatives of the meetings industry:

The square and Aleja Kongresowa are a way of permanently highlighting the positive impact of the meetings industry on the development of the Malopolska capital. 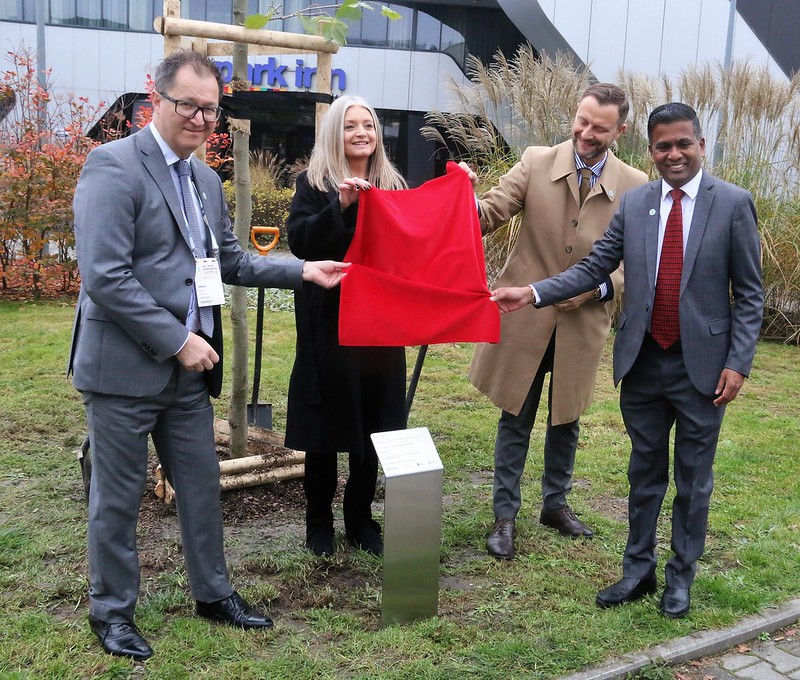 In addition to following its programme of work, various proposed CSR activities were also an important part of the congress. Among other things, volunteers from various ICCA branches chose to clean up the Liban Quarry area together and helped the Ukrainian community. Working with the local initiative – Team Kraków for Ukraine – participants sorted clothes needed for the coming winter. Another group prepared 200 litres of soup as part of the Soup for Ukraine campaign. The jars were picked up almost immediately by those in need.

Another group took part in a Polish handicraft workshop, donating cards written in Polish and gifts to the residents of the Ludwik and Anna Helcel Nursing Home. Among the more than 350 residents, there are people who have passed their 100th birthday in good health! 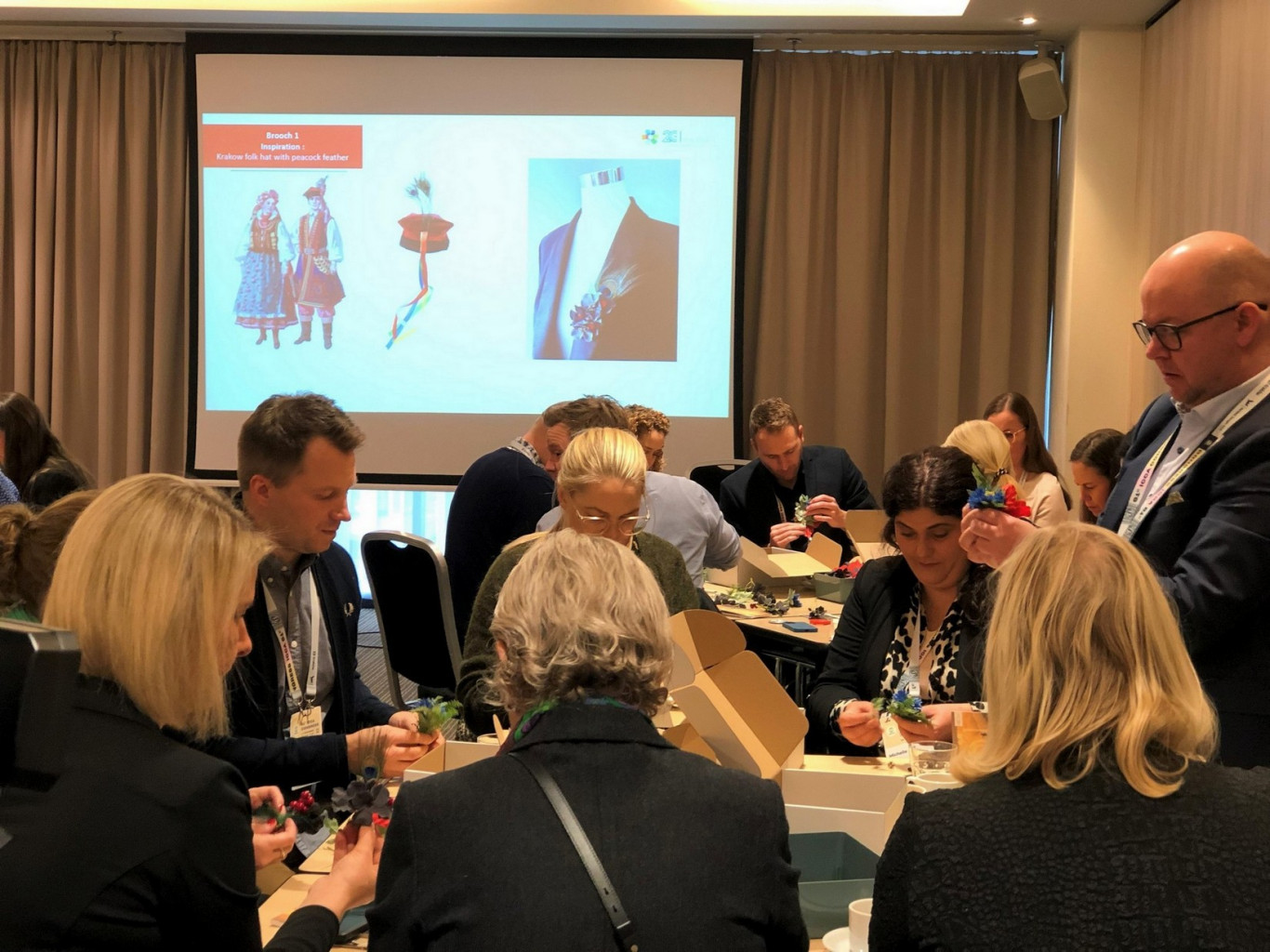 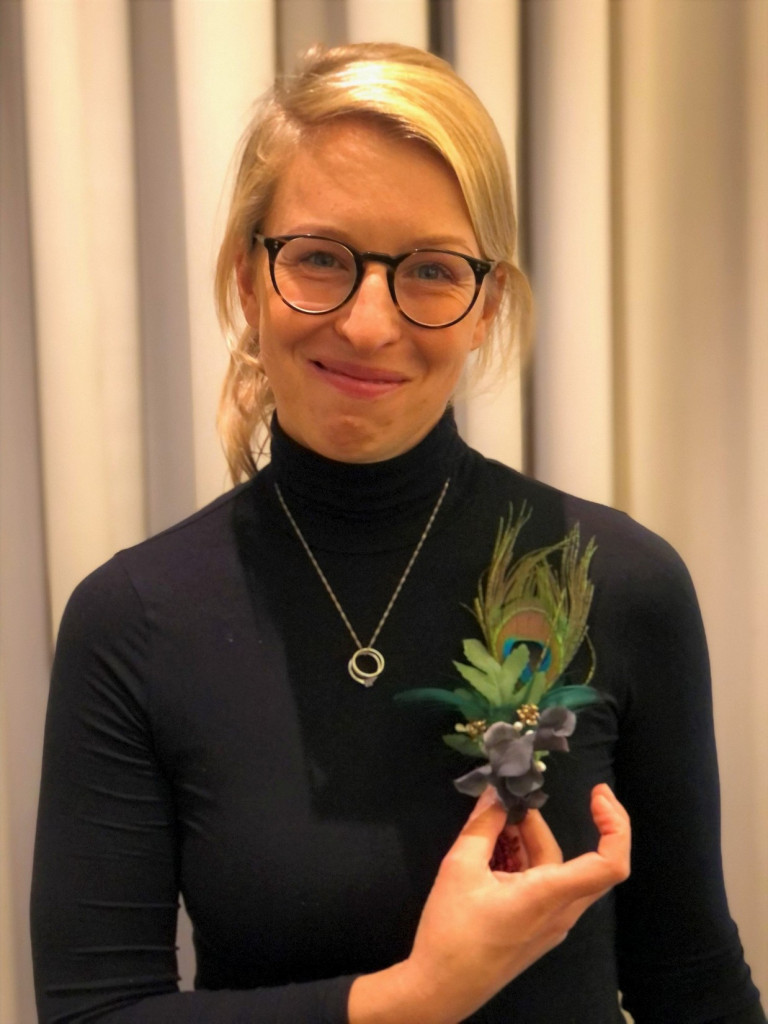 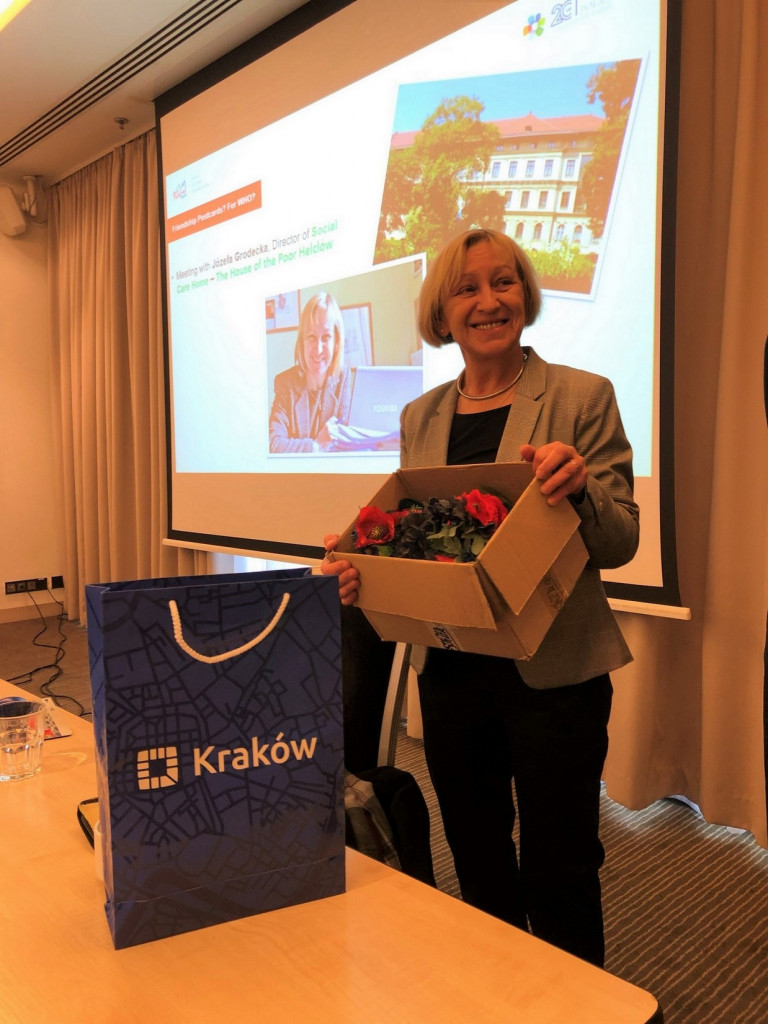 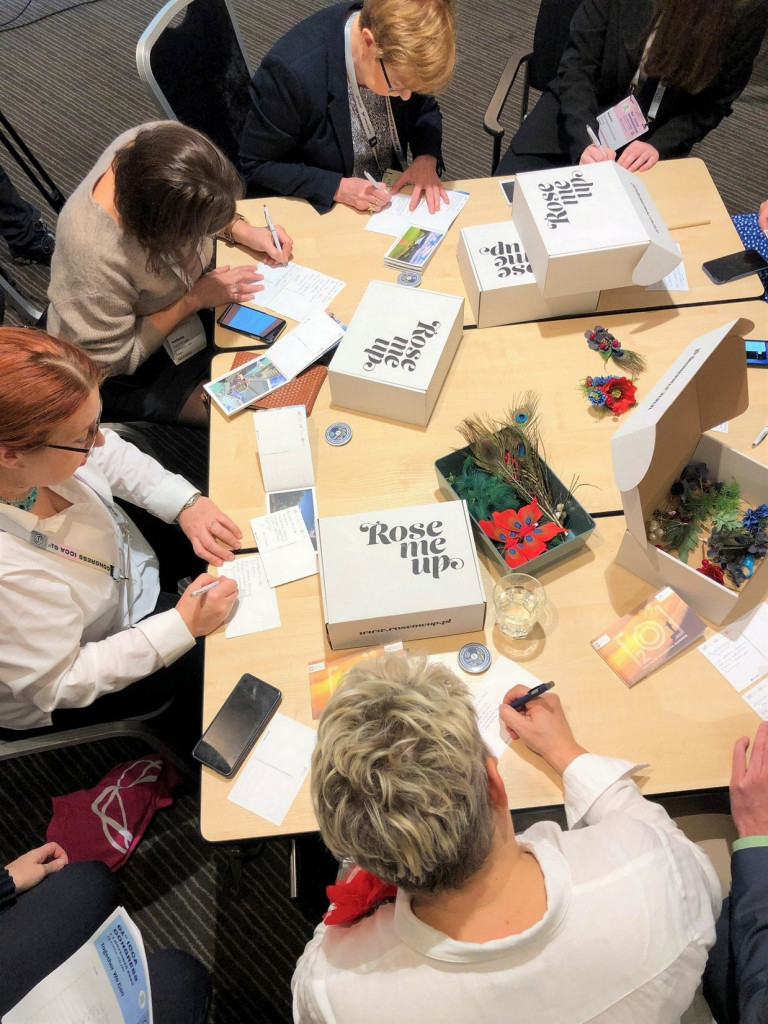 Rose Me Up workshops during the ICCA Congress.

In addition, the delegates supported the Secondary Education Hostel No 2 in Nowa Huta, which houses 150 Ukrainian students. Numerous Christmas gifts were collected for children and young people during the congress, including mugs and thermal bottles, baseball hats, sweets and cosmetics.

During registration, congress participants made voluntary donations to Polish Humanitarian Action, and a charity run was organised along the Vistula boulevards: the ICCA association made a donation for each person who completed it, totalling € 2,500.

These activities show that international events are not closed sessions for specialists, but enter into the fabric of the city and its inhabitants, who are already present in the initial phase of congress procurement. The involvement of organisers and the local community is just as important as transport accessibility or infrastructure. This fact was noted by the ICCA Board of Directors when the right to organise the 61st ICCA Congress was granted to Poland.

2022 is a jubilee year for the Polish meetings industry. The organisation of the congress in Krakow, as well as providing an opportunity to exchange experiences and transfer good practices, was a chance to present Poland's cultural heritage, Polish hospitality and the latest developments in the field of business tourism to ICCA's international delegates. 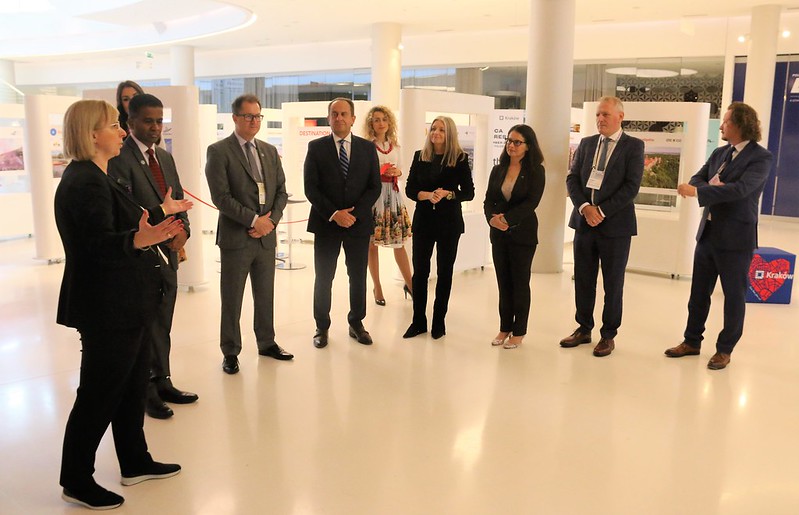 Scientific congresses and educational events tend to be accompanied by special exhibitions. That was also the case at the 61st  ICCA Congress, during which the PTO promoted Polish regions. The exhibition, entitled "Destination Poland", was on display in the main foyer of ICE Kraków in the form of 30 photographs of congress cities and flagship cultural events, as well as picturesque spots in the regions. The exhibition was created in cooperation with regional and local tourism organisations and city and regional convention bureaux. The exhibition was officially opened by:

Sustainable food trends are not a fad, they are a permanent feature of the congress menu, where reducing food waste and using seasonal local produce are important. The menu, therefore, included vegetarian/vegan options as well as gluten-free and dairy-free options. Poultry- and fish-based meats were preferred, as they have a lower carbon footprint than pork, beef or lamb.

Polish regional products have an extraordinary quality, unique character and flavour, which is why two regional coffee breaks organised during the congress by Mazovia (Mazowiecka Organizacja Turystyczna) and Poland's new ICCA member, the G2A Arena Exhibition and Congress Centre of the Podkarpackie Province, were an excellent complement to the Destination Poland exhibition. Guests were able to taste, among other things, Mazovian kutia, naturally pressed juices or proziaki - traditional Podkarpackie buns.

Thanks to the efforts of the Krakow Convention Bureau, operating within the Department of Tourism of the Krakow City Hall, the city of Krakow joined the unique Global Destination Sustainability – GDS-Index – initiative this year.  By participating in the GDS-Index, Krakow hopes to become an inspiration for other Polish cities and is counting on the cooperation and involvement of institutions, providers, professional event organisers (PCO and DMC), delegates and residents.

Krakow's consistent efforts to build a reputation as a city that is conscious, responsible and concerned with introducing sustainable development standards in various areas of life, especially in the field of tourism, something that was said not only by the official organisers from behind the lectern, but also by the speakers on stage and the delegates in the congress corridors, who raved about the architecture and functionality of the congress centre and the cleanliness of the city.

The GDS Index compares cities on the basis of their sustainability performance, and the classification is made on the basis of seventy criteria, divided into four main categories:]

When a destination joins international benchmarking, it is an opportunity to accurately diagnose the current state of affairs and obtain guidelines and proposals for improvement. Participants include cities such as Copenhagen, Glasgow, Sydney, Helsinki, Belfast, Lyon and Reykjavik, among others. The author of the Index is the Global Destination Sustainability Movement (GDSM), which brings together sustainability pioneers from the world of business and leisure tourism.

By participating in the GDS-Index, Krakow wants to become an inspiration for other Polish cities and is counting on the cooperation and involvement of institutions, suppliers, professional event organisers (PCOs and DMCs), delegates and residents.

The 61st ICCA Congress in Krakow was attended by 900 delegates from 80 countries, including 70 members of international associations, numerous representatives of PCOs and DMCs who are looking for destinations for their events. Most of the foreign participants in the congress had come to Poland for the first time.

The Polish Tourism Organisation deliberately used the ICCA congress to promote Poland as a leader in Central and Eastern Europe based, not only on initiatives taken before the event, but also at the event itself and after the congress, organising inspection visits for selected participants together with local congress bureaux. Some of the participants had the opportunity to get to know Krakow, as well as Warsaw, Gdansk/Sopot and Katowice/Silesia, and to see that our congress infrastructure and technical facilities are of the highest level, while the professional organisation of the ICCA congress itself is the best recommendation and reason to return to Krakow – and not only Krakow.