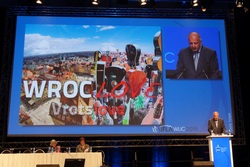 Wrocław has been selected as a host for the IFLA World Library and Information Congress in August 2017. The decision was officially announced at the closing session of this year’s Congress in Cape Town (South Africa). The conference is expected to attract 4,000 participants.

The IFLA World Library and Information Congress (WLIC) is the largest international flagship event for the library and information services. The conference is held annually and each year it brings together thousands of librarians who represent a hugely influential group in their countries. The event is an important platform for exchanging of ideas and preparing a roadmap for the most crucial issues. Most importantly, it gives the opportunity to identify areas of collaboration and enables knowledge sharing between the institutions and associations.

In 2014 IFLA Congress took place in France (Lyon), in 2013 in Singapore, in 2012 in Helsinki and in 2011 in Puerto Rico. This year’s Congress was held in Cape Town in South Africa. Next year, it will take place in the United States (Columbus, Ohio). The IFLA annual Congress has been held in Poland only once so far: in 1959 in Warsaw.

For Wrocław, IFLA Congress has the additional value as in 2017 Wrocław’s designation as the UNESCO World Book Capital comes to an end. The Congress is accompanied by satellite conferences, sightseeing program of libraries, the city and surroundings, as well as exhibitions of the latest technologies in the field of library and information services.