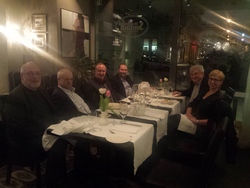 On 11-12 February this year, at the invitation of the Institute of International Relations of the University of Warsaw (ISM UW) and the Global Wings company, representatives of the World International Studies Committee (WISC) conducted a study visit in Warsaw.

The purpose of the visit was to confirm its reception capacities with respect to the organisation of a WISC congress in 2017.

Every three years, the World International Studies Committee organises a global conference dedicated to international relations, attended by 800–1000 people from all over the world. To date, the congress was held in Istanbul (2005), Ljubljana (2008), Porto (2011) and Frankfurt am Main (2014).

Poland Convention Bureau of the Polish Tourist Organisation (PCB POT) supported the efforts to win this event for Poland made by Professor Edward Haliżak, Director of the Institute of International Relations of the University of Warsaw and the Global Wings company (Recommended Professional Congress Organiser of the Poland Convention Bureau POT) and hosted a dinner held on 11 February in the Akademia Smaku Restaurant in Warsaw.

Two cities are considered for the venue of the next congress: Warsaw and Taipei (Taiwan). The final decision on the congress location and the confirmation of its organiser are to be announced this year.