The Strategic Alliance of the National Convention Bureaux of Europe has released the results of a study on “The Impact of Coronavirus on Europe’s Convention Sector”.

The analysis, prepared by Tourism Economics, aims at providing a constructive narrative of the meetings and conference sector’s pathway through the crisis, towards recovery, and has developed three scenarios to reflect the possible range of outcomes from this crisis. The European research is supplemented by a report on Poland.

Baseline, upside and downside scenarios for European convention community
The baseline scenario assumes that all planned events scheduled between March and August are cancelled across Europe, with some recovery in September and October seeing up to 75% of all planned events within a given month going ahead and full recovery by November. Altogether, total event visits in Europe are expected to fall by 58% in 2020. Under the baseline model, some lingering negative sentiment effects are anticipated for both domestic and international event participation, which would result in a reduction in average attendance in 2021 and 2022 of 25% and 5% respectively, before fully recovering in 2023.

The upside and downside scenarios provide two alternative forecasts, indicating that business convention tourism will fall between 36% and 77% in 2020 with a sharp recovery under the upside and a more prolonged one under the downside scenario. The latter assumes, for example, that in September and October only 25% of all planned events are completed, with up to 75% taking place for the remainder of the year within a given month. It also foresees continued government restrictions on the size of gatherings in 2021 and a stronger impact of negative sentiment amongst potential attendees, which will ultimately not see full recovery before 2024. The upside scenario, on the other hand, works with the assumption that the crisis is brought under control in the next few months and expects a recovery beginning in June, with 25% of all planned events going ahead, increasing to 75% in August and all planned events being completed from September onwards.

Factors driving the impact of coronavirus crisis
In developing the three scenarios, the study considered the actions that governments, businesses and individuals take to curb the outbreak as they primarily influence how the coronavirus impacts the meetings and conference industry. Three factors in particular are driving the impact and were taken into account for the analysis:

Forecast for Poland
The analysis prepared by Tourism Economics - Oxford Economics was created on the basis of data provided by the Poland Convention Bureau POT, collected annually for the Poland Meetings and Events Industry Report and aggregated data from the GTS Tourism Economics database. The scenarios, based on research results, assume a decrease in the number of conference tourism participants between 32% and 76% in 2020, after which, in subsequent years, a gradual progress is visible, until full recovery market in 2023. 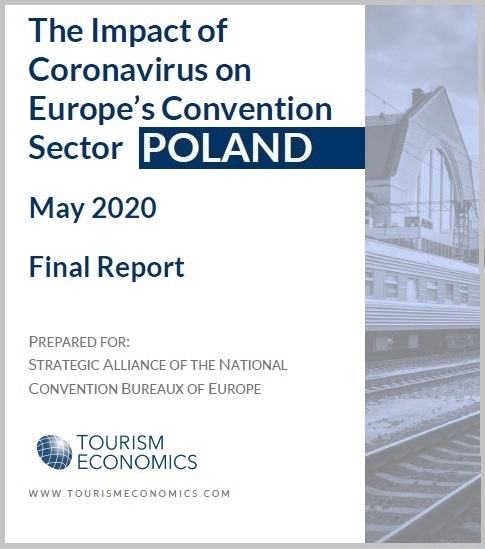 Poland Convention Bureau PTO, as its founding member, participate in all research projects and meetings of the Alliance which follows the objective of reinforcing cooperation between European countries. By being involved in actions aimed at working out joint standards of the European industry, we emphasise Poland’s position as an attractive region for meetings and business events in the international arena.