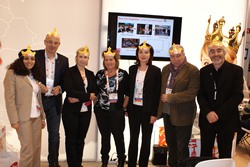 On 29 November – 2 December Barcelona played host to the EIBTM exhibition – one of the meetings industry’s essential events. During the exhibition we continued  project aimed at attract new industry representatives from around the world who moves their imagination in the Polish crown. Many people eagerly responded to the campaign and we successfully created a gallery of photographs of foreign Polish ambassadors.

During the EIBTM, Poland Convention Bureau conducted meetings with over 200 professionals. It was a perfect opportunity for business networking.

At the national stand, Poland was represented by the following: