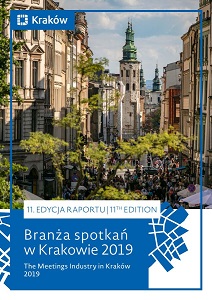 The report developed at the request of the Krakow Convention Bureau of the Krakow City Office has been providing information about the meetings industry in Krakow for 11 years. This particularly concerns the number and structure of events, participants, the seasonality of the industry, as well as Krakow conference venues or congresses organized in the city, and includes data covering the past 3 years. The possibility of comparing the development and detailed parameters of the meetings industry over the years is a great value of the report.

The authors of the report emphasize that the meetings industry generates income for companies, remuneration for employees and taxes for cities. But the meetings industry is also about intercultural integration and knowledge transfer between participants, as well as an opportunity for much-needed interpersonal contacts.

In 2019, 8,400 business meetings were held in Krakow, 78% of which were domestic. As in previous years, in 2019 the largest share (over 2/3) of all business meetings included congresses and conferences, of which there were more than 5.6 thousand. Corporate and incentive events were ranked second (32%, i.e. over 2.6 thousand). As compared to 2018, an increase in the number of participants in congresses and conferences by 18% was recorded.

The number of participants at meetings and events in 2019 was record-breaking – more than 1.2 million people. More than half, as many as 670 thousand delegates participated in congresses and conferences, which confirms the position of Krakow as a city hosting such meetings.

The distribution of events during 2019 in Krakow was quite typical for the meetings and events industry. Two seasons were recorded: the autumn with a peak in October, and the also popular September. Increased spring interest was also recorded in May and June. July and August were the least popular. Importantly, the differences between the most popular months and February, March or November were not large, which proves the reduction of the seasonality phenomenon. One-day events prevailed in the case of conferences / congresses and corporate / incentive events.

The strong position of hotels as hosts for events should be emphasized when analyzing the structure of the meetings market. Last year, almost 6,000 business meetings were organized in them. Nevertheless, the number of events organized in hotels is consistently decreasing in relation to the total number of meetings organized (three years ago, 80% of all events took place in hotels, in 2018 - 75%, and 71% in the previous year) in favor of the so-called "Facilities for special events" and higher education facilities.

The full text of the "Meetings industry in Krakow 2019" report