Raffles Europejski Warsaw will be Poland’s most luxurious hotel to receive a five-star-plus rating. It will become open for booking on 1 May 2018. 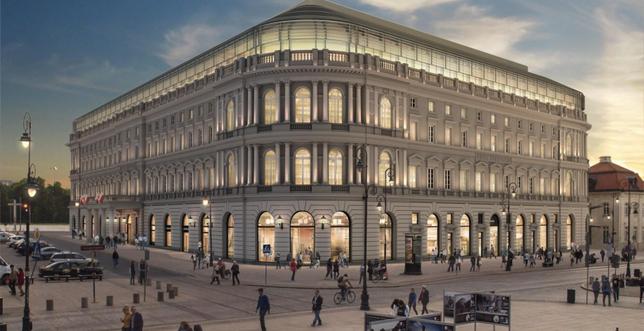 Hotel Raffles Europejski Warsaw is being developed on the site of the once illustrious Hotel Europejski, in the very centre of Warsaw, right next to the Royal Route. It will feature 106 rooms set on three floors, with upscale suites accounting for about 40%. In addition, the venue will accommodate a conference centre, a restaurant, a confectionery store, the Long Bar, a spa salon, a cigar lounge and an underground parking lot.

The hotel’s interiors will refer to the rich history of Warsaw. To maintain their one-of-a-kind character, the hotel rooms’ furnishings will be prepared on special request by local craftsmen and designers. The room décor will be complemented by Polish porcelain and glass from 1960-1980 and preserved brass ferrules as a decorative element from the turn of the century. A collection of about 400 works by contemporary Polish artists, compiled under the supervision of Anda Rottenberg and Barbara Piwowarska, will adorn the hotel walls. It will be one of the largest private collections of this type to be opened to the public.

An operator of luxury venues, the Raffles brand was founded in 1887, when it launched its first upscale hotel in Singapore. Up to this day Raffles is synonymous with the most prestigious hotels in the world.

The history of Hotel Europejski precedes the Raffles brand by 30 years, dating all the way back to its opening in 1857 when it was recognised as the city’s most luxurious venue. After wartime devastation, hotel owners began its reconstruction halted by the 1948 seizure by the Ministry of National Defence intending to set up a military academy. It was not until 1962 that, following an adaptation of interiors, the venue was converted back to a hotel, first owned by the Orbis state tourist company and eventually, in 2005, handed over to the heirs of the original owners.

Heirs of the Przeździecki and Czetwertyński families, the hotel’s founders, are now the owners of Europejski, members of the H.E.S.A. company and investors of the discussed transformation, together with Vera Michalski-Hoffman, Swiss millionaire, art patron and publisher.

Renovation of the venue was inaugurated in 2013. The operator’s intention, besides the development of a luxury hotel, is to create a meeting place open to Warsaw residents, passers-by and other guests.