On 17 November 2011 in Artus Court in Toruń the 12th Polish Congress Ambassadors Gala took place – inviting 14 new personalities from the world of science, who contribute to the organisation of meetings in Poland, to the prestigious group of Honorary Ambassadors. The evening was officially opened by Michał Zaleski – Mayor of Toruń, Edward Hartwich – Vice-Marshal of the Kujawsko-Pomorskie Province, and Zbigniew Ostrowski – Vice-Governor of the Kujawsko-Pomorskie Province.

The Polish Congress Ambassadors Gala featured presentations of actions undertaken under the promotional campaign concerning, i.a., business tourism, of the Polish Tourist Organisation on the German, British, and French markets, as well as the conference potential of Toruń and its region.

The distinguished guests included representatives of municipal and provincial authorities, as well as tourism and science. Each of the Ambassadors received a certificate and gift from the city and the organisers. Having finished the official part of the evening, the guests listened to Bogdan Hołownia and his band “Los Angeles Trio.” 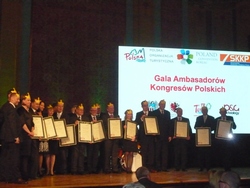 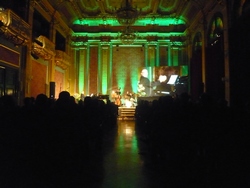