Anna Górska is running in elections for the Board of Directors of International Congress and Convention Association (ICCA), which Polish Tourism Organisation - Poland Convention Bureau joined in 2002. 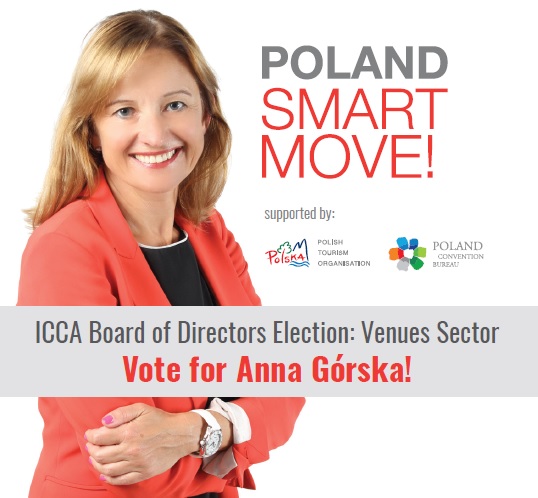 Anna Górska, currently involved with EXPO XXI Warsaw and with Gdańsk Tourism Organisation - Gdańsk Convention Bureau in 2007-2014, has for six years held the position of the Chairperson of ICCA Central European Chapter. This year she is running in elections for the association’s Board of Directors in the Venues sector. Her candidature was submitted by Stefan Lohnert of the Stuttgart-based ICS International Congress Center, also head of ICCA German Committee, and Mahira Julfara of Dubai World Trade Centre, current member of the ICCA Board of Directors. Along with other Polish ICCA members, Polish Tourism Organisation extended its support to the candidate.

The voting starts already this week and all ICCA members representing the venues sector are eligible to vote. You can cast your vote either online or at the ICCA congress scheduled to take place in Dubai on 11-14 November. This is also where each candidate will present his or her “election promise” during a five-minute speech.

Anna Górska is an accomplished manager boasting many years of experience in supervising organisations, teams and major projects. Her activities earned her numerous awards and distinctions, such as the 2014 Personality of the Year award in the MP Power Awards competition, the 2015 “For contributions to tourism” honorary badge presented by the Ministry of Sports and Tourism, as well as being listed among the top 100 most influential people for Poland’s tourism in 2017 (in the field of close cooperation with Polish scientists and experts representing different areas). She is a member of domestic and international organisations associating meetings industry professionals, where she plays an active part as a volunteer promoting Poland as an attractive destination for meetings (both of the business and leisure kind). As a jury member she is highly committed to evaluating domestic and international competitions connected with the meetings industry:  ICCA Best Marketing Award, Eventex Awards, MICE Poland Personality of the Year and the Polish Congress Ambassadors Programme. In addition, she is an academic lecturer and a CONVENE Ambassador. On numerous occasions she participated in domestic and international congresses as a speaker.

In the role of a member of the ICCA Board of Delegates Anna Górska would like to take advantage of her long-term experience and consequently emphasise the need for synergy between companies representing the private and state sector, a factor of essential importance for bringing international events to Poland. She is also planning to spread the word about the significance of the Congress Ambassadors Programme and focus on relations between business, science and local government, which she finds helpful in her everyday work. Górska’s presence in the Board of Directors in an organisation as seminal as ICCA would be synonymous with Poland gaining an enormous promotional and image-related advantage, as well as generate substantial benefits for companies from the Polish meetings industry.

Voting results will be announced at the ICCA congress on 14 November.