At the end of May, the International Congress and Convention Association (ICCA) published the latest ICCA Ranking Report, which presents data on the countries and cities in which the association organises the most events. In this year’s ranking, Poland came in 18th globally, having hosted 158 meetings. 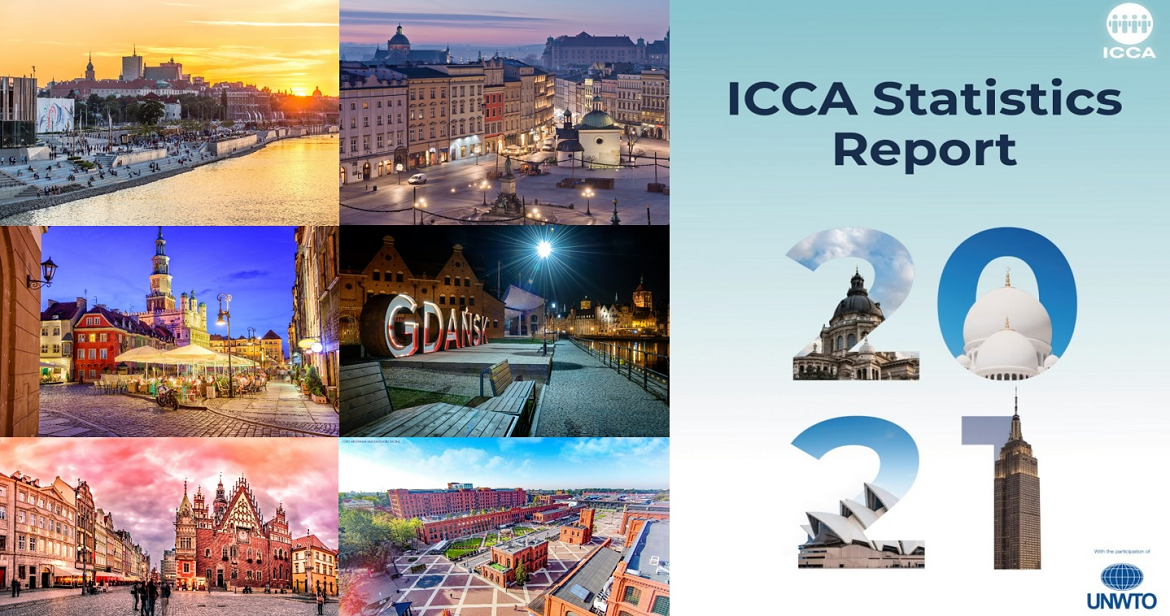 In addition to the one prepared by the Union of International Associations (UIA), the ICCA report is considered to be one of the most important rankings in the industry. It is a benchmarking tool for the congress and conference potential of business destinations, allowing to identify competitive gaps and advantages when looking to find a host for a particular event. The ICCA database also provides information on the needs of individual associations and enables you to prepare customised bid books.

The ICCA statistical report is prepared based on data concerning ICCA meetings collected from convention bureaux, conference facilities, hotels and associations themselves. To be considered, the meetings must meet three conditions: they should be held regularly, have a minimum of 50 participants and migrate between at least three countries.

Last year, due to the pandemic that changed everything for the meeting industry globally, the ICCA was forced to change the way data was collected and evaluated. As a result, the report is different than usual. Instead of the ranking of regions, the impact of COVID-19 on the association meetings worldwide was presented.

This year, it is back to presenting statistics. A useful tool that has been developed is the Destination Performance Index (DPI). It is designed to recognise and reward the efforts made by the destinations to win offers, the policy and implementation of COVID precautions and the adaptability and technological capabilities of possible conversion of in-person events into virtual or hybrid events (and thus maintaining business continuation). DPI is composed of six performance indicators based on the number of meetings (meetings planned, unaffected meetings, virtual meetings, hybrid meetings, digitisation: virtual/hybrid, business continuation: unaffected/virtual/hybrid). All of these indicators make up separate rankings, which are combined in DPI.

Poland has kept a  strong  position in the ICCA 2022 ranking. Collecting required information on events meeting ICCA conditions was possible thanks to the cooperation of Poland Convention Bureau POT with the municipal and regional convention bureaux and the professional congress organisers recommended by POT. In addition, without the involvement of representatives of Polish science in the labour-intensive and often long application process, our cities would not be among the world’s centres of business tourism, in order to compete with other places for hosting events.

This year’s report leaves no doubt about the fact that all regions of the world have been affected by the pandemic. The latest edition analyses 7955 different events, compared to over 13,000 before the pandemic. Nevertheless, it is a positive fact that Poland has been maintaining a strong position in the ranking for many years thanks to its extensive infrastructure, its central location and its intellectual potential. It also remains the only country of the Visegrad Group to be ranked in the top twenty. What contributed to this result is the well-known congress cities, or the so-called first choices (Warsaw - 49 meetings, Kraków - 45 meetings), as well as the second (Poznań - 15 meetings, Gdańsk - 13 meetings, Wrocław - 12 meetings, Łódź - 6, Katowice - 2) and third (Lublin – 3, Olsztyn – 3, Szczecin – 2 and Białystok, Będlewo, Chęciny, Toruń, Wieliczka, Zakopane - one meeting included in the ranking each). 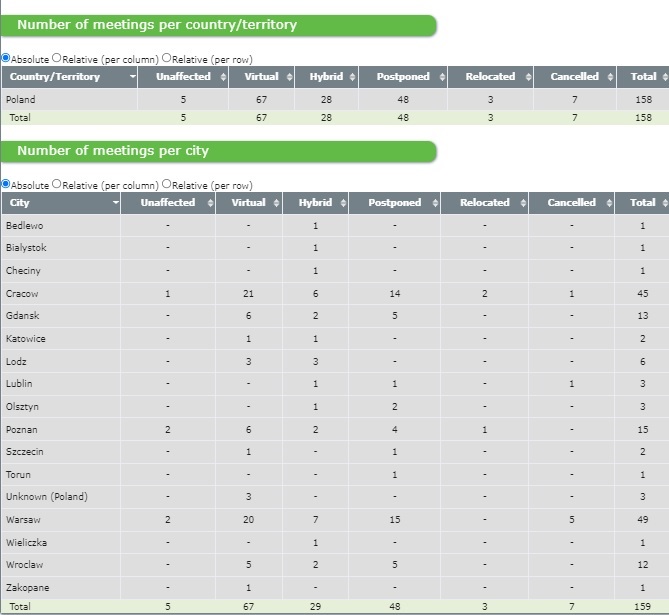 In comparison, the results in the V4 and the Baltic countries are mostly influenced by the capital cities, and therefore: Czechia held 118 ICCA meetings of which 95 were held in Prague, Hungary – 66, of which 57 were held in Budapest, Estonia – 47 of which 33 were held in Tallinn, Lithuania – 43 of which 38 were held in Vilnius, and Latvia in which all the reported meetings had taken place in Riga – 19. 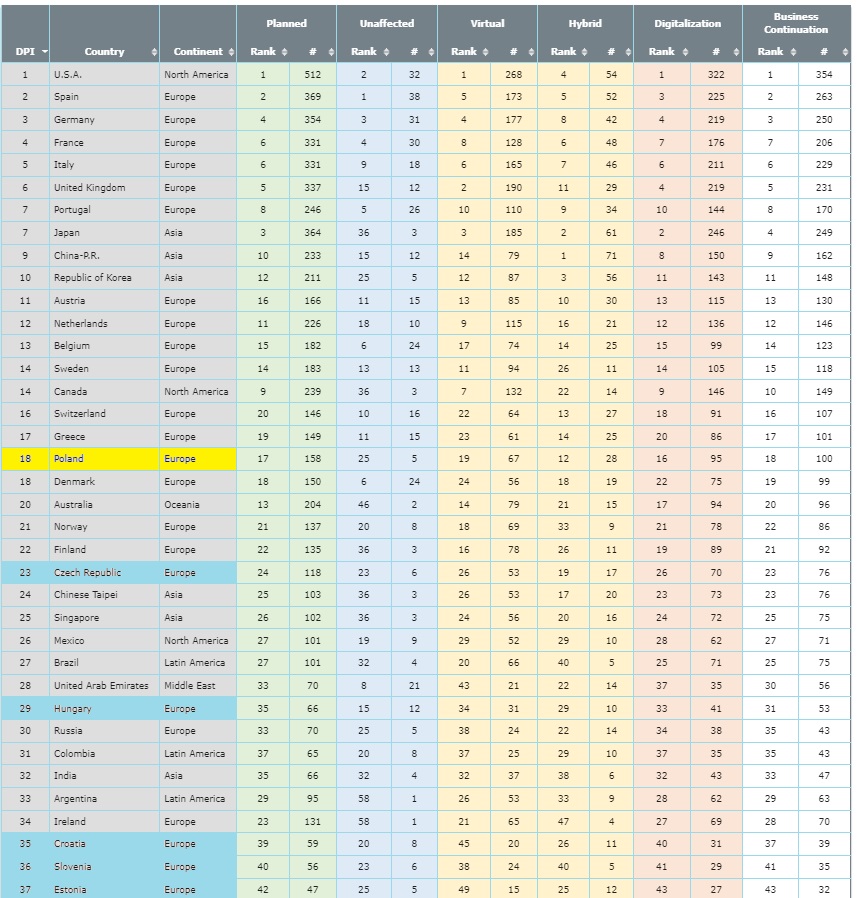 Looking globally, the US once again triumphed among the most popular conference and congress organisers with 512 meetings (previously, there were a lot more, 934, but this is pre-pandemic data). Returning to the podium is Spain, ranked second (369 meetings), followed by Germany (354 meetings), which saw a drop from second to third, thus pushing France out of the top three. Vienna (92 meetings), Lisbon (91 meetings) and Athens (66 meetings) lead among cities. In the top ten, we also have Barcelona, Singapore, Madrid, Prague, Paris (which lost its top position), Berlin and Brussels.

ICCA is one of the oldest meeting industry associations operating in almost 100 countries around the world, representing more than 1100 companies and organisations involved in the preparation and coordination of meetings, transport and accommodation. For more than 50 years, it has been collecting and analysing data as well as creating communication channels for international business meetings.

Membership in ICCA brings many benefits. It provides a cost-effective way to attract and obtain events from the meeting industry. It allows access to a global network of contacts, which provides the opportunity to operate within a global platform representing all sectors of the meeting industry. It provides access to a database of over 72,000 conferences organised by more than 5000 associations. In this database, you can find information about the history of each conference and about associations. In addition, the ICCA carries out extensive training activities for its members.

Local co-operation and building of synergies between representatives of the scientific community, as well as local entrepreneurs and local government authorities, increase the likelihood of a given destination succeeding in the application process for hosting events. Poland's acquisition of the 61st ICCA Congress is a good example of such cooperation. The ICCA Congress will take place on 6-9 November this year in Kraków and registration is open now on a dedicated website: https://www.iccacongress.org/

In the ICCA association, Poland is represented by 16 members: a cross-section of cities, facilities, organisers and carriers. The Polish Tourism Organisation has been a member of the ICCA since 2002, i.e. since the moment Poland Convention Bureau was established. Among other things, PCB POT is responsible for annual reporting to ICCA of events that took place in our country.