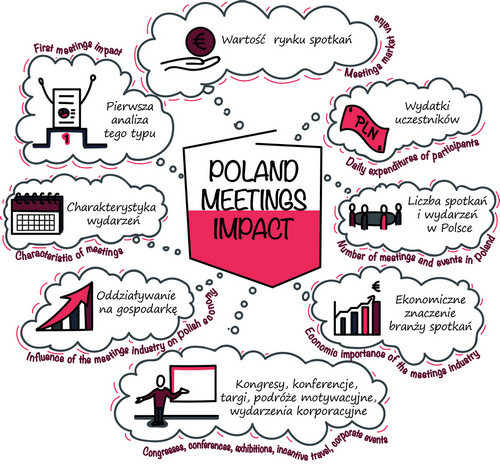 What is the value of Poland’s meetings industry? What economic benefits are generated by events, both for their organisers and the economy as a whole? The recently launched Poland Meetings Impact project is Poland’s first and the world’s seventh study intended to estimate the economic value of the meetings sector.

The discussed study and a subsequent report are designed to present the economic value generated by holding conferences, congresses, business meetings, corporate events, trade fairs and major events in Poland. The project’s authors seek to estimate the value of a sector that so far has not been described and explored from an economic viewpoint and to determine its impact on the economy.

“Why is this challenge worth taking? The meetings sector in Poland is certainly underestimated, mostly because people are unaware of its significant and far-reaching character. Secondly, this is a rapidly expanding industry, as evidenced by the growing investments in infrastructure and their outcome, the internationally recognized standards adopted by Polish event organisers and the increasingly strong position of events as a business tool. The economic impact of the meetings industry has already been studied on several developed markets that are aware of its worth. Their experiences convinced us to undertake this task and take an important step towards boosting the industry’s growth”, argues Dr. Krzysztof Celuch, head of the Poland Meetings Impact project, manager of Poland Convention Bureau POT.

Besides Krzysztof Celuch (Poland Convention Bureau POT) as the leader of the project, Poland Meetings Impact involves Prof. Ewa Dziedzic (Warsaw School of Economics), Prof. Jadwiga Berbeka (Cracow University of Economics) and Magdalena Kondas (Warsaw School of Tourism and Hospitality Management, MeetingPlanner.pl). Z-Factor is the technology partner of the study intended by its authors to bring together representatives of the scientific community and industry professionals.

The discussed study is expected to begin with the analysis of the expenditures of event participants (stage one of the project) and move on to the budget structure of event organisers (stage two) and venues (stage three). The report will also encompass an analysis and presentation of statistical data covering the staging of meetings in Poland, including a breakdown by regions.

Separate questionnaires for each of the categories above, created in consultation with industry representatives, have been sent out to respondents selected through simple and systematic random sampling methods, depending on how numerous the particular groups are.

The expected publication date of the report is the first quarter of 2017.