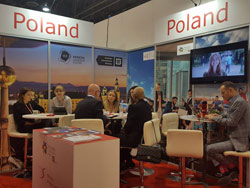 On 18 – 20 October this year, the sixth edition of IMEX America was held. At the national stand over 50 meetings were held with people interested in Poland as a venue of conferences, congresses or incentive travels.

Poland was represented at the stand by:

IMEX America is a relatively new business event that enables thousands representatives of the meeting industry to gather in one place at one time. After many years of success of IMEX in Frankfurt, in 2011 it was decided that the exhibition should also be organised in the United States.

The sixth IMEX America set new records all around the show. There was a record number of exhibiting companies – 3,250, a 4.8% increase on 2015 - representing 139 countries. They included 69 new booths and another 69 booths had expanded year on year. Together they created the largest ever IMEX America.

Well over 3,200 hosted buyers attended the show this year, also a new record.