The jubilee fifth edition of Open Eyes Economy Summit (International Congress of the Economy of Values) is this year’s largest online congress to be staged in Poland. 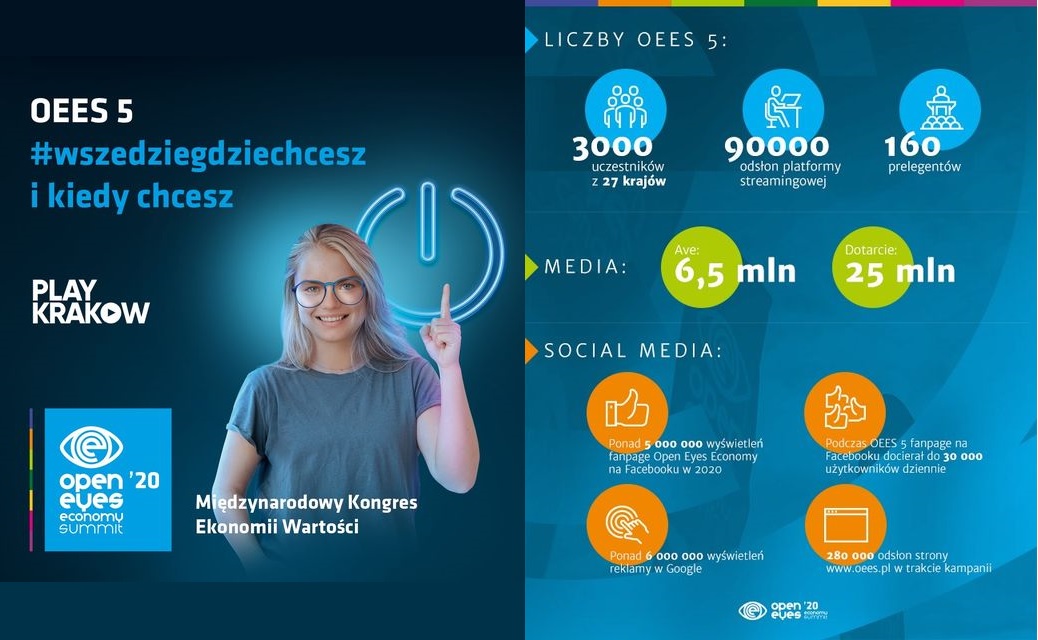 Open Eyes Economy Summit, Kraków-based international event dedicated to economy based on social values, dates back to 2016, with each edition attracting experts on science, economy, culture and politics.

The debates of this year’s online congress, staged on 17-18 November 2020, focused on several topics: “Man in the artificial intelligence environment”, “Solidarity in development”, “Anthropocene - world management”, „Mutualisation of resources and common goods”, “Architecture and urban adaptation to climate change” and “Education - a new generation”. In addition, it once again featured the “International governance” thematic block.

The event was attended by more than 160 speakers (30 onsite and more than 130 logging in remotely) - experts, delegates of governments, organisations and corporations from all over the world - as well as more than 3,000 participants from 27 countries, who generated 90,000 views.

The Summit is organised by the Foundation of Economy and Public Administration, with Concept Music Art (CMA) handling its production. The congress studio was arranged at ICE Kraków Congress Centre.

The implementation of the Open Eyes Economy Summit involved close to 100 production team members. The congress was simultaneously staged onsite in five Kraków Congress Centre rooms and in the CMA online studio, where hosts and speakers were seated. The mobile studio run by Spokesperson of the Kraków Festival Office, moving across the ICE Kraków Congress Centre and broadcasting the entire congress, provided a noteworthy added value. The edition attracted the attention of many media outlets, including TV stations, which connected live with ICE Kraków and broadcast conversations with guests in the congress’ television studio.

The whole event’s production was based on a platform provided by wydarzeniaonline.pl. In addition to a registration system, it featured an expo zone, live streaming zones, a live chat, online networking, Q&A sessions and online rooms dedicated to meetings and thematic discussions.