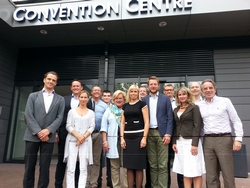 Europe’s position as the number one destination for business events is set to be strengthened with the launch of a new initiative by European national convention bureaus. This strategic alliance is the first of its kind and aims to strengthen the position of Europe across the globe as a meeting and event destination.

From an initial idea conceived over a year ago by Eric Bakermans from the Netherlands Board of Tourism and Conventions and Matthias Schultze from the German Convention Bureau, the initiative has rapidly expanded and welcomed 17 members. The aim of this informal group of European national convention bureaus is knowledge sharing and cooperating to further strengthen the position of each individual member as well as boosting Europe’s standing as the leading continent for business events in the world.

Eric Bakermans, marketing manager for Holland meetings, conventions and events, and Matthias Schultze, Managing Director of the German Convention Bureau, speaking on behalf of the group, comment:
“We’re aiming to have a constructive and active collaboration on issues to make us stronger as Europe, without compromising each country’s unique identity. Our partnership approach unites the individual and unique offerings of each member, to simplify and strengthen the approach towards key markets.”

"Europe is the number one meeting destination worldwide for association meetings, hosting nearly 2.5 million business visitors a year. The number of meetings held is nearly three times as many as the second largest market. This is a compelling proposition, and we wanted to create an initiative which builds on this success and enables convention bureaus from across the continent to join together."

"Matthias and I started the initiative to address the need for knowledge sharing on specific issues which affect our daily work as national convention bureaus. We’re aware of the need to work towards combining our efforts to utilise these strengths and expertise to market throughout the world."

The group has met three times over the past 18 months and has generated immense interest. The next step for the new initiative will be a meeting of members and other interested European national convention bureaus in Copenhagen in the New Year to further progress the alliance.