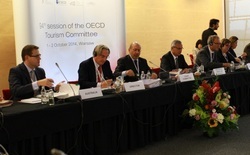 On 2 October 2014, an international seminar on the impact of mega sporting events on tourism was held at the National Stadium in Warsaw. The seminar was opened by Ms Katarzyna Sobierajska, Under-Secretary of State in the Ministry of Sport and Tourism.

Sporting mega-events generate considerable emotions, income and costs. Their international and often global scope places them at the centre of attention of fans, politicians, as well as big and small business.

The international seminar answered the question of whether tourism in fact profits from the organisation of mega sporting events. It also explained what the costs of organisation of such events are from the perspective of tourism. The seminar included a presentation of case studies e.g. from the 2012 UEFA European Championships in Poland, London 2012 Summer Olympics and Australian Open. The discussion was attended by high-level representatives of tourism administration from the OECD countries with considerable experience in the field of sport tourism, as well as representatives of European sectoral organisations and the world of science.

The seminar accompanied the 94th sitting of the Tourism Committee of OECD held on 1–2 October 2014 at the National Stadium attended by the delegates from 34 OECD countries, partner states and organisations.