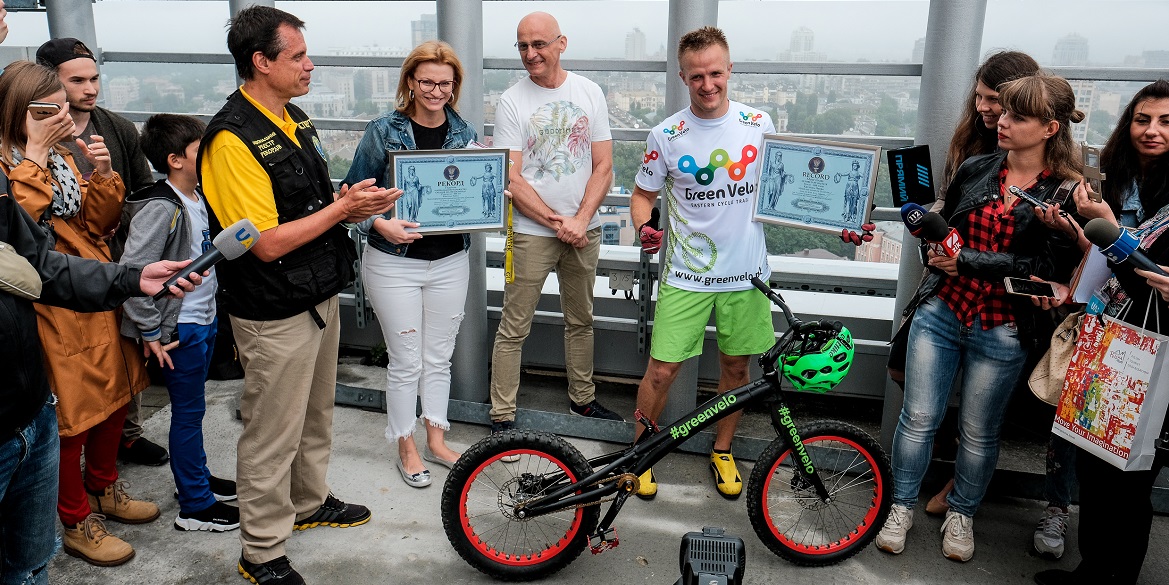 The concept of the Kiev-based office of Polish Tourism Organisation (Polska Organizacja Turystyczna - POT) to promote Poland’s cycle tourism through spectacular athletic feats captured media attention and the interest of many sports fans. The event in question was staged in Ukraine’s tallest building, the Gulliver Multifunctional Complex. Krystian Herba, athlete and Guinness World Record holder for most steps climbed by bicycle, was the hero of the day.

In accordance with the agreement between Włodzimierz Szczurek, Head of the Kiev office, and Tatiana Atadjanova, Director of Gulliver’s PR Department, the bike trial champion faced his latest challenge on the Youth Day on the second to last weekend of June. His objective was to climb the 888 stairs of the Ukrainian skyscraper on a bike, 161 metres from the ground floor to the roof, as fast as possible. There was no lack of excitement. Supervised by Vitaliy Zorin, Ukrainian representative of the Guinness World Records office, the attempt would be stopped if Herba momentarily lost balance, leaned or touched the surface with a bike part other than a wheel. None of these things happened and the Polish athlete successfully reached the floor in 17.10 minutes, thus setting Ukraine’s new record.

Surrounded by journalists, organisers welcomed the new record holder on the roof, while crowds of bike trail fans were waiting below. The popularity of the record-breaker grew considerably after an interview on one of the Ukrainian TV channels. According to Wojciech Szczurek, Head of POT’s Kiev office, Herba is now among the most recognizable athletes in Ukraine. Immediately after the successful climb up the Gulliver, passers-by were stopping by the cyclist and congratulating him on the remarkable feat. Groups of bike trail fans were queuing to get posters signed by Krystian.

The operator of the East of Poland Cycling Trail Green Velo successfully took advantage of the interest shown in the event and the overall popularity of cycle tourism in Ukraine. Representatives of the voivodeships of Podkarpackie, Lubelskie, Świętokrzyskie and Podlaskie all came to Kiev on the weekend the record was beaten in the Gulliver Complex. The majority of promo materials - maps, gadgets, t-shirts and bike water bottles - quickly disappeared from information booths. Maria Michur-Ziemba, Deputy Director of the Department of Promotion, Tourism, Sport and International Cooperation at the Office of the Marshal of the Podkarpackie Voivodeship, considers this method of promoting tourist products to be highly effective. After last year’s presentation of Green Velo in a 5-D capsule in Kiev and Lvov, she met Ukrainian tourists encouraged by the discussed advertisement to spend their holidays cycling in Poland.