The Shibuya Stream Hall, a culture and business complex in Tokyo, was the venue for the Polish Festival 2021 on 19 June, an event organised by the Polish Institute in Tokyo in association with the Polish Embassy and the Polish Tourism Organisation (POT). This was already the 13th edition of the biggest event promoting Poland in Japan. 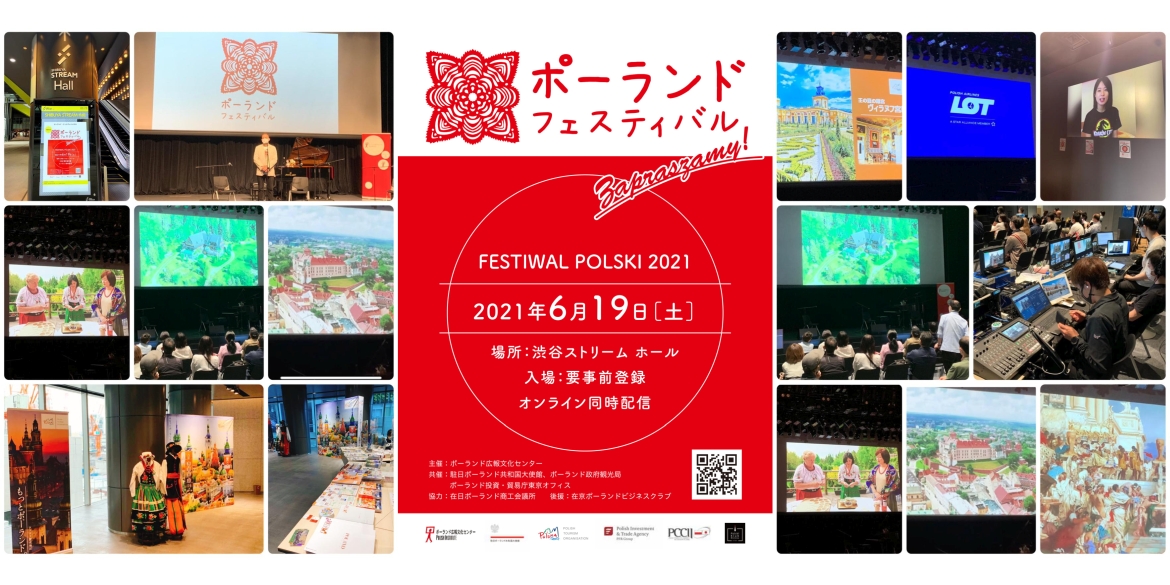 Due to the COVID-19 pandemic and restrictions in force in Tokyo regarding public events, this year’s festival was held in hybrid mode, involving a limited number of visitors entering the complex and live streaming of the whole event.

The festival in Tokyo was opened by Polish Ambassador Paweł Milewski. It was visited by over 700 people (in accordance with the restrictions), while over 2,700 people followed it on YouTube in real time and over the following days.

The festival was preceded by a campaign on the social media of the Polish Institute and the POT International Office (ZOPOT) in Tokyo (Twitter, Facebook, Instagram) as well as advertising in 810 carriages of three Tokyo Metro lines, several days before the event began.

One major item on the Polish Festival’s programme was the screening of a film in Japanese promoting Kraków and the Małopolska region, the first such production made jointly by Kraków City Hall, the Małopolska Tourism Organisation and the ZOPOT in Tokyo. The inaugural screening took place as part of a stage presentation. The film’s three parts – Walking Around Kraków, Traditional Home Cuisine, and Rafting down the Dunajec – showcased UNESCO World Heritage sites in Małopolska, unique Polish folk costumes (of the Pieniny highlanders), the beauty of nature in Poland, and locations with a connection to Japan as well as culinary traditions shared by the two countries.

The first part of the film introduced Japanese audiences to major sites on the Royal Road in Kraków and places connected with Japan, including the Feliks Jasieński Szołayski House and the Manggha Museum of Japanese Art and Technology, plus the legend of the Wawel dragon. Part two presented a culinary titbit, namely pierogi, which are called gyouza (餃子) in Japanese, and also the beauty of Gorce National Park. The third part continued to showcase the wonders of the Małopolska region, including the VeloDunajec route, Niedzica Castle, Lake Czorsztyn, and rafting down the River Dunajec. This film journey was supplemented with a presentation of the rafting tradition and the unique costumes of the Pieniny highlanders, whose history was recounted to the audience during a virtual trip down the Dunajec river gorge on a cinema-sized screen.

The Polish information stand was fitted with a state-of-the-art Me-fie device for taking selfies during a virtual trip around Poland. This form of interaction resulted in over 90 pictures being taken by visitors to the Polish Festival at Shibuya.

In addition, specially for Japanese tourism industry representatives who followed the event, LOT Polish Airlines (PLL LOT) and the ZOPOT in Tokyo in association with the Warsaw Tourism Organisation produced a joint presentation proposing a new sightseeing route in Warsaw. The presentation also encouraged people to visit Warsaw for the autumn edition of the Fryderyk Chopin International Piano Competition.

The joint promotional project of PLL LOT and ZOPOT Tokyo was enhanced by a quiz lasting until 22 June, in which the main prize was a plane ticket for two to Poland. The other winners will receive nine smaller prizes.

The festival programme included many other attractions, to mention two piano concerts, Polish language lessons, and the celebration of the Year of Lem – the 100th birth anniversary of Stanisław Lem.