Polish Tourism Organisation published its first live streams via Chinese travel platforms. The new and innovative form of promotion in the Asian market initially focused on Poznań and Warsaw. 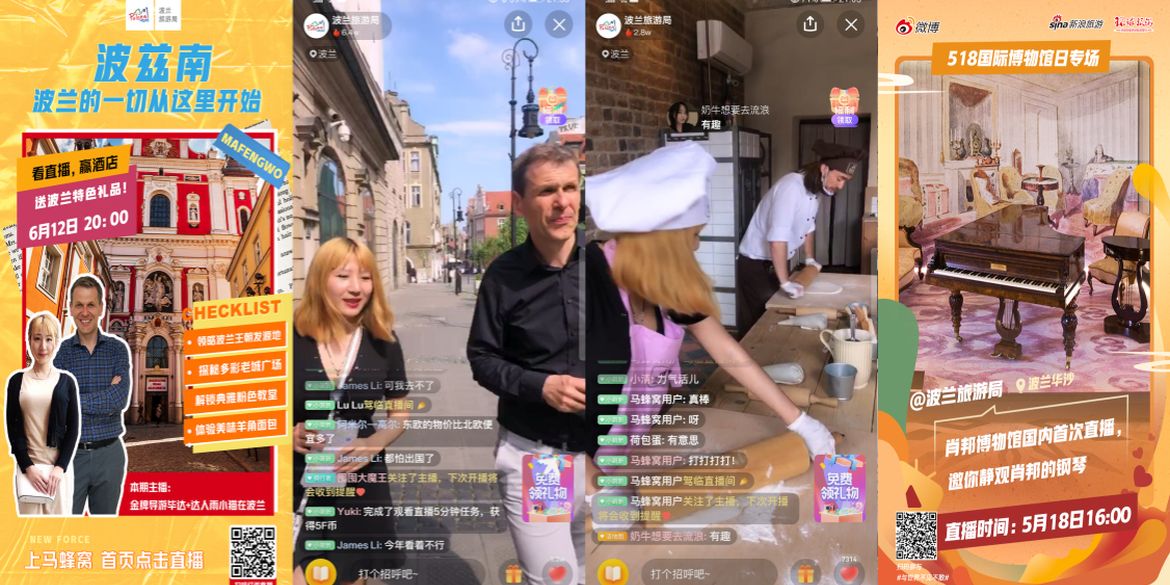 For a long time China has been among the priority markets of Polish Tourism Organisation (Polska Organizacja Turystyczna - POT). The number of Chinese residents travelling to Poland has been growing year by year and in 2019 reached the impressive level of 160,000 arrivals. POT’s actions are usually aimed at the industry (trade shows, workshops, e-learning) and leisure tourists. Since 2018 Polish Tourism Organisation is increasingly active in Chinese social media and each year conducts a wide range of campaigns in cooperation with China’s top Online Travel Agencies (OTAs), such as Ctrip, Mafengwo and Tuniu.

The pandemic forced POT to thoroughly revise its plans and search for new methods of reaching the target group of Chinese tourists interested in travelling to Europe. At the same, the discussed travel platforms increasingly often apply live streaming content, a natural consequence of the discussed technology becoming more advanced. Until recently, live streams were applied most often by sales platforms such Taobao and Little Red Book. In this context, even in high-tech China travel live streams continue to be something of a novelty that only started developing.

POT’s first live stream in the Chinese market was conducted in cooperation with the Warsaw Tourist Office in mid-May. To celebrate the International Museum Day, a live stream from the Fryderyk Chopin Museum in Warsaw assumed the highly unique form of a static frame focusing on Fryderyk Chopin’s last piano, enabling viewers to share their comments with the help of a chat box. The stream was a part of Sina Weibo’s campaign related to the Museum Day. Following this debut, POT partnered up with the Mafengwo platform and Poznań Local Tourist Organisation to implement a bolder concept - a two-hour live stream straight from Poznań.

From the viewpoint of POT’s International Office in Beijing, securing the support of a Chinese social media platform constituted the most important part of live stream preparations. In this case, thanks to cooperation with Mafengwo, we could rely on their full technical support and promotion among the travel portal’s users. The second essential component involved finding an appropriate partner in Poland - a regional or local tourist organisation. We are glad to say that the Poznań team demonstrated a truly proactive approach and were eager to handle the pioneering challenge of live streaming aimed at the Chinese market.

While live videos on Facebook may be nothing out of the ordinary in Poland, such content in China is a different thing altogether and requires familiarity with the latest Chinese-language applications and a specific way of hosting live streams. This brings us to the third fundamental component essential to a successful live stream: the hosts. In this case you will not only need fluent speakers of Chinese that are well versed in the natural assets of Poland, but also someone who has great camera presence and is able to communicate well with his audience. This is why we decided to onboard Piotr Karpiński, a guide that previously worked with us on many occasions and who gave Xi Jinping himself a tour of Poland, and Shiyu, a Chinese living in Poznań and running a successful profile on Douyin (known as TikTok outside of China) detailing her life in Poland. Together they created a highly dynamic duo that helped viewers explore Poznań from various angles.

The live stream from Poznań was hugely popular, making it to the number four spot among Mafengwo’s top streams at the time. The viewers were particularly interested in gift giveaways, which included weekend stays for two at Sheraton Poznań Hotel, Ziaja beauty products and gadgets with a Polish motif. According to Mafengwo’s popularity ranking, calculated on the basis of the number of viewers, their comments and virtual gifts, the live stream earned 65,000 points, a very good result for a first stream by a new account. By way of comparison, live streams by tourist organisations score between 50,000-70,000 points on average.

POT’s Beijing-based International Office is now planning successive live streams, this time from Warsaw (to be published on Mafengwo in mid-July) and the region of Małopolska (in cooperation with the Sina Weibo portal).