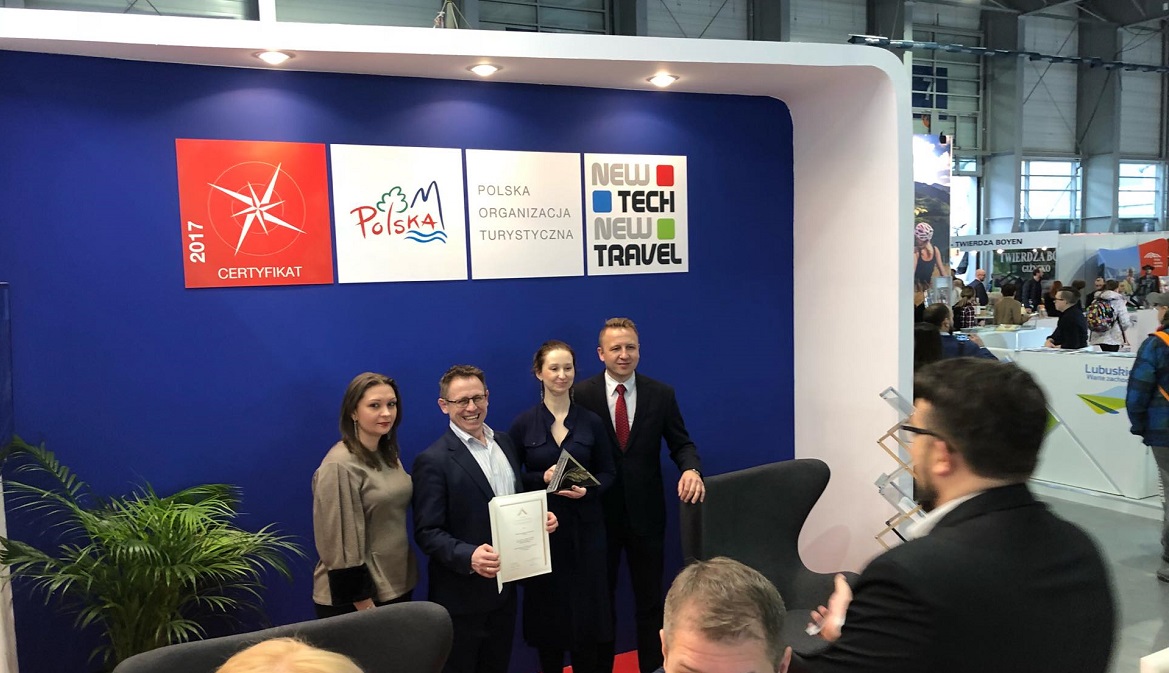 Polish Tourism Organisation received the Acanthus Aureus statuette at the Tour Salon Trade Fair of Regions and Tourist Products in Poznań. The distinction recognizes company stands distinguished by the best design and most fitting for marketing strategy implementation.

Staged in the pavilions of the Poznań International Fair on 9-11 February the Tour Salon Trade Fair of Regions and Tourist Products was attended by representatives of Poland’s tourism market and travel enthusiasts.

For this purpose Polish Tourism Organisation (Polska Organizacja Turystyczna - POT) arranged a highly advanced and innovative stand. Among the highlights, a VR cinema took spectators on a trip into the world of the virtual reality. Visitors to the POT pavilion could see films selected from a series of four promo videos shot in the 360-degree technology. This is Poland’s very first such an advanced and immersive project, setting the story of its protagonists against the backdrop of the country’s most beautiful spots.

Guests of the Polish stand could also use a GIF booth and tourism entrepreneurs - register in the polskazobaczwiecej.pl undertaking offering weekend stays at half price.

In addition, virtual reality competitions (Poland in VR - Europilot) and multimedia touchscreen table activities were available. There was no shortage of contests and quizzes with awards related to tourism products distinguished by the prestigious POT Certificate and the abovementioned Poland See More - Weekend at Half Price initiative.

The Polish Tourism Organisation stand was appreciated not only by visitors, but also by experts, who presented it with the Acanthus Aureus award recognizing Tour Salon’s top stand as regards design and adjustment to marketing strategy implementation. The list of winners also included, i.a. the stands of Pomorze Zachodnie (Western Pomerania) and Śląsk (Silesia).

The results of the second edition of POT’s New Tech - New Travel technology competition aimed at start-ups were announced in the course of the trade fair’s opening ceremony. This year, the category of B2B solutions unquestionably dominated, demonstrating that the trends clearly growing in recent years (AI, beacons, voice-activated communication systems, IoT) are now becoming a regular part of smart, well-devised solutions.

A main award and two distinctions were presented in the B2B category, with the winner - Telmedicin Sp. z o. o - recognized for medical teleconsultations aimed at travelling patients and available in their native languages. This is one of Poland’s very first telemedicine platforms making it possible to consult a physician when in travel. The distinctions were awarded to the solutions of Green Parrot GmbH and BedBooking sp. z o.o. The competition’s chapter decided not to present a main award in the B2C category. After a lengthy discussion, a distinction was granted to PW Network for its XOXO WiFi mobile hotspot solution.

On the occasion of the Tour Salon trade fair in Poznań, a meeting was held between POT and Regional Tourism Organisations (Regionalne Organizacje Turystyczne). The former was represented by, i.a. Vice-President Agnieszka Jędrzejczyk-Wojciechowska and directors Magdalena Ragus, Jacek Janowski and Teresa Buczak.