Numerous texts about Poland have been appearing on Belgian news and travel web portals since January. This is the effect of the Pack Impact! promotional campaign that the Polish Tourism Organisation (POT) is running in Belgium in association with the GRANDE portal. 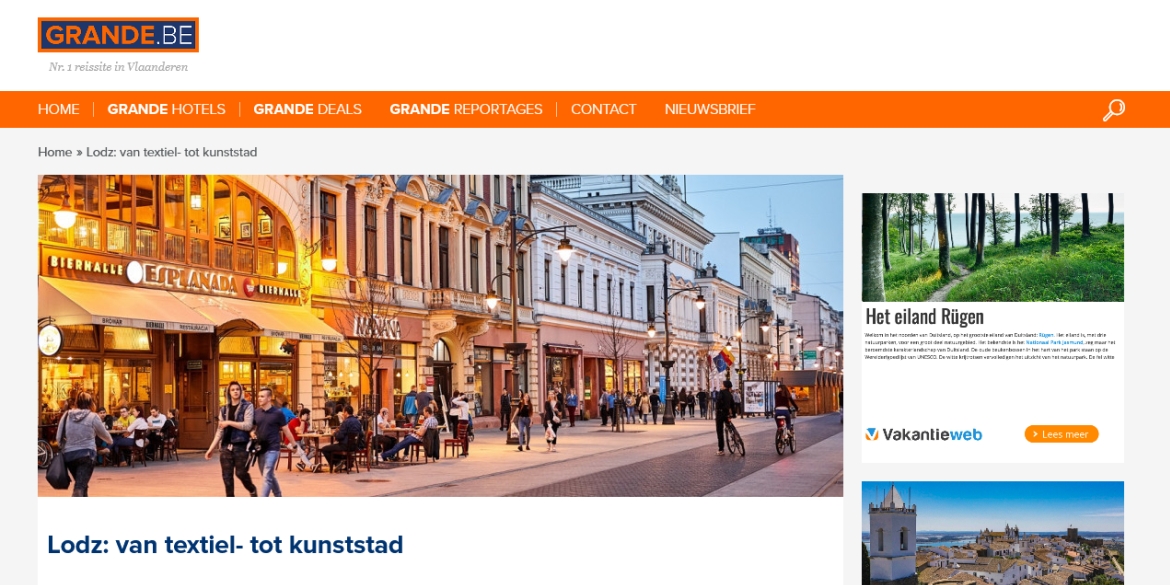 The campaign is designed to reach an audience of 1.5 million, which is a large number for Belgium’s population of 11 million. The project of the POT International Office in Brussels involves a series of 16 articles written by the editor-in-chief of the online magazine GRANDE, Gert Van Wichelen. This experienced journalist, who has taken part in countless press trips, including some to Poland, takes his readers to the eight Polish provinces that are taking part in the project. Among other things, he describes the Małopolska and Green Velo cycling routes, the undiscovered charms of the Opole region, active tourism in Pomerania and Wielkopolska, and the treasures of Poznań and Łódź.

“Our readers are always very interested in new destinations to discover and explore. The ones they are most interested in are places not too far from Flanders, where you can get by car or on a short flight. We posted a few travel pieces about less well-known parts of Poland in recent years, and all of them were rather popular. This is also sure to be the case with the Pack Impact! publications”, Van Wichelen commented on the POT’s campaign.

The greatest value of this campaign is the collaboration with leading Belgian news media, i.e. web portals updated daily and having the greatest reach. Texts about Poland will be published in the biggest French-language daily, Le Soir, and on the websites of the Flemish dailies Het Laatste Nieuws and Knack. There will be no shortage of texts on websites targeted at travel enthusiasts: the tourist attractions of Poland will be presented to readers of Vakancesweb/Vakantieweb, Belgium’s biggest tourism platform. Content about Poland will also be published in regional dailies and on news and business websites. The choice of such major and influential media guarantees prestige and excellent visibility for Poland as well as inspiration for stunning trips that tourists can enjoy once the pandemic ends.

GRANDE is the largest web portal specialising in tourism-related topics in Flanders. It publishes in-depth texts, with a special focus on European countries. GRANDE magazine existed in paper form for many years, as the leading travel magazine on the market. In last year’s Belgian Travel Awards, a competition initiated by GRANDE, Kraków came in first place in the best city-trip category.