The Polish Tourism Organisation promotes Poland in Rome using contemporary and urban art. Between 30 September and  30 October, the Rome districts of Trastevere and Testaccio will be home to art installations created by the Sbagliato art collective in cooperation with The Trip creative agency. The protagonists are Kraków and Wrocław, two different cities, both rich in history and traditions. In these modern and avant-garde cities, art is an integral part of a rich and often difficult past. 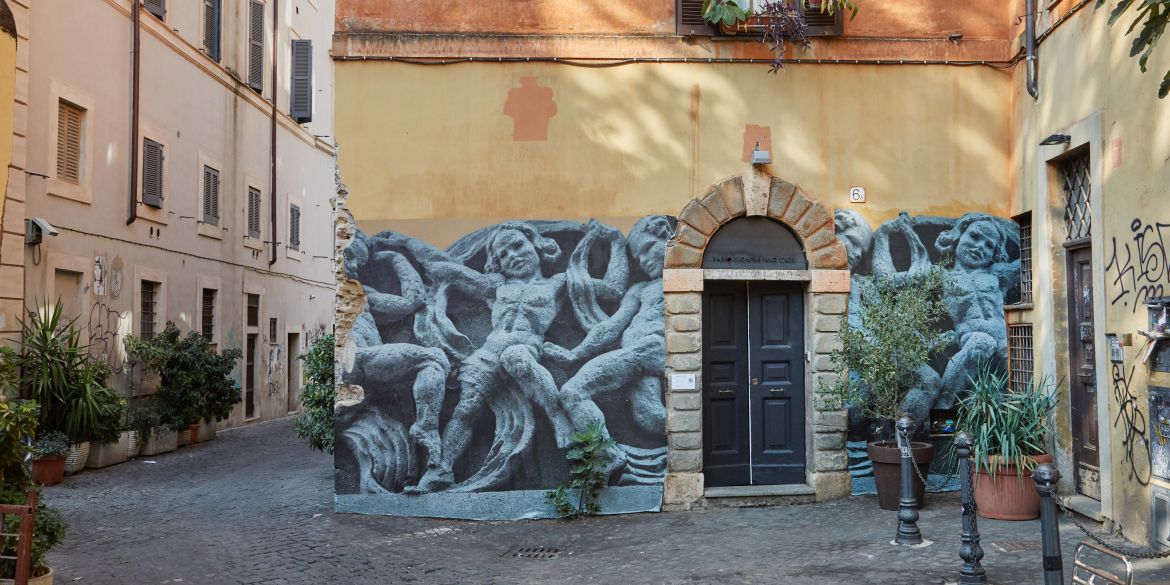 The Polish Tourism Organisation promotes Poland by using contemporary art in two bustling rioni, or districts of Rome: Testaccio and Trastevere, both of which are symbolic places for the locals. This groundbreaking initiative is the result of teaming up with the Sbagliato cooperative, an art project founded in 2011 by a group of friends working as architects and designers.

The Polish Tourism Organisation has entrusted the Sbagliato with the creation of modern installations to express the spirit of both Polish cities without forgetting the rich historical and architectural heritage of Poland. The urban art project entitled “Fragments of Poland” (It. Frammenti di Polonia) emphasises the architectural uniqueness of Kraków and Wrocław, presenting them from artistic and cultural points of view.

The visionary installations are the result of the synergy between architecture, graphic arts, photography and collage. This allowed the architectural elements to capture perfectly the character of a given city. The work of Roman artists is based on the desire to interfere with the urban tissue, creating “gaps” in the rigid order created by architecture, by using installations seen as an ideal medium because of its ephemeral and mimetic nature. Inspirations, the power of suggestion and emotions - these are the artistic foundations of the Sbagliato philosophy. This is not typical street art, but above all a vision which breaks the mould in architecture, making art alive and fleeting.

“This is a new promotional tool for Poland”, stresses Barbara Minczewa, the director of the POT International Office in Rome, “but it is also an attempt to open a dialogue with the city, entering the living fabric of the Eternal City through fragments of the architecture of two Polish cities. We have chosen two very popular districts, close to the city centre, which are at the same time authentic and bear testimony to the history of the city. Kraków and Wrocław, also represent a living testimony to Polish history, and through this artistic endeavour we want to present to the Italians this common denominator: being immersed in history while at the same time showing dynamic growth and a bold look into the future”, she added.

The Sbagliato artists were in Poland in July, where they became familiar with Wrocław and Kraków and with the cities’ traditional and more avant-garde faces. Once they picked the sites in Rome where the installations were to be implemented, they selected from among the many images of Poland those that would best fit into the context of the Italian capital and created a non-obvious artistic effect, attracting attention from passers-by. “The selected fragments of the architecture of Polish cities are a part of the Wrocław railway station and the decoration of a building in Kraków’s Kazimierz district”, says Barbara Minczewa. “Non-obvious places, not necessarily associated with the most popular sights of these cities. Thus, this project forms a part of the strategy of telling about the historic cities of Poland, which the Italians already know quite well, in a new discourse, reinterpreting the attractions of our country in a modern way which reflects the creative atmosphere in Poland”, she explained.

The installations are located in the district of Trastevere, in the immediate vicinity of the Piazza di Santa Maria in Trastevere (the square is home to the Basilica of Santa Maria in Trastevere), and in the district of Testaccio, on the outside wall of the Testaccio Market (It. Mercato Testaccio), opposite the main entrance to the MACRO Museum of Contemporary Art. Both art installations are located in very busy districts, frequented both by local residents and tourists, while also remaining characteristic and showing the authenticity of the city.

The installations are provided with descriptions, modelled on museum ones, supplemented by QR codes directly linked to the local POT office website, describing both the installations themselves and the cities.

The project was created in cooperation with promotion departments of both the Kraków and the Wrocław City Halls, which hosted artists and a journalist from The Trip Magazine in July. It is also the result of working with The Trip creative agency, which aims to promote new, increasingly avant-garde artistic forms strongly linked to the past as well as to history and traditions.

The installations can be seen in Via San Calisto 6A in Trastevere and on the walls of the Testaccio market in Via Beniamino Franklin in Testaccio.