The fourth edition of the “Poland See More - Weekend at Half Price” campaign organized by the Polish Tourism Organization in cooperation with the Ministry of Sport and Tourism is underway. The recruitment of industry partners has just started and the campaign finale is to take place on the weekend of 9-11 March. 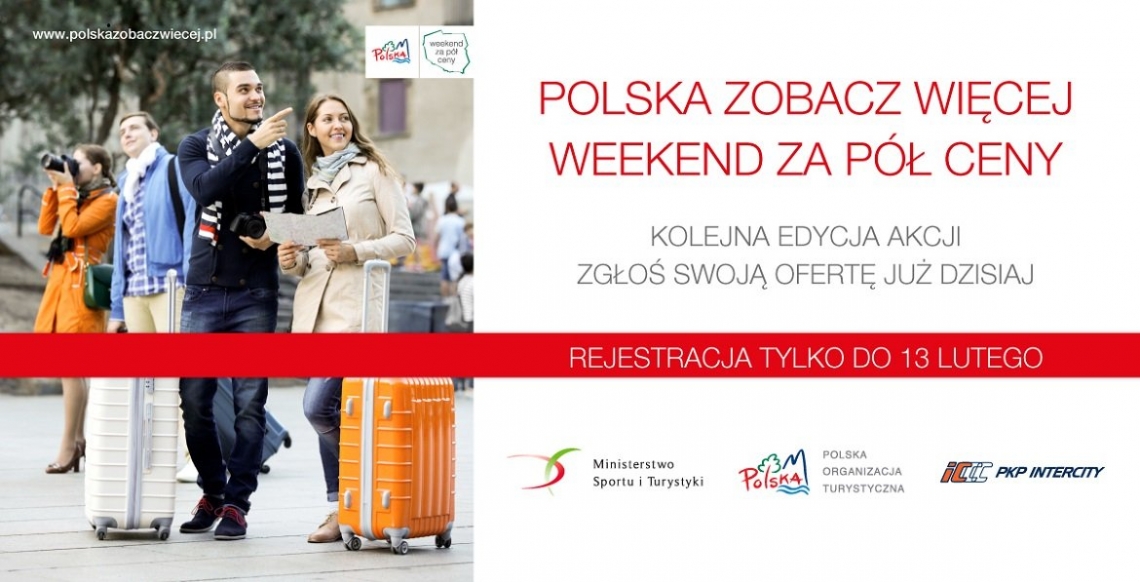 The Polish Tourism Organization (Polska Organizacja Turystyczna - POT) invites hoteliers, restaurateurs, tourism entrepreneurs, organizations, and other legal entities associated with tourism-related services to take part in the fourth edition of the “Poland See More - Weekend at Half Price” nationwide campaign. Applications can be submitted with the help of a specially prepared form available at www.polskazobaczwiecej.pl., featuring additional detailed information about the campaign and the possibilities of participating in it.

The registration of industry partners ends on 13 February. The sale of offers starts on 21 February and the campaign finale will be held on 9-11 March.

The objective of the campaign conducted by POT and the Ministry of Sport and Tourism is to present a nationwide tourist offer and to encourage benefiting from tourist attractions and services across the whole country, also outside the main vacation seasons. The efforts are aimed at stimulating domestic tourism and drawing attention to the possibility of spending leisure time in Poland. The campaign also exerts a positive impact on the growing importance of tourism as a field of the Polish economy.

“’Poland See More - Weekend at Half Price’ enjoys enormous and constantly growing interest among tourists. Each time the previous three editions demonstrated that Poles are keen to gain an opportunity to discover the beauty of their country”, declares Minister of Sport and Tourism Witold Bańka.

The prime beneficiaries of the campaign include Polish tourists, who may plan vacations at reasonable prices. The list also includes the tourist branch, which can rely on financial incomings and through consolidated activity gains an opportunity for joint promotion in the so-called low season. In addition, the campaign intends to popularize vacations in Poland during the spring and in the autumn.

The latest, autumn edition of the “Poland See More – Weekend at Half Price” campaign held on 6-8 October 2017 drew the attention of 554 legal entities, which became involved in the campaign and offered their products and services at 50% lower prices. About 110,000 tourists benefited from the campaign and thanks to promotion prices saved almost 8 million PLN.

“Each edition of ‘Poland See More - Weekend at Half Price’ proves to be increasingly profitable. This time too we count on a growing number of partners and the offer presented by them. This is an excellent opportunity to display one’s best assets and convince tourists to return at another time”, says Robert Andrzejczyk, President of the Polish Tourism Organisation. “We inspire Poles to travel across the whole of the country and not only within the bounds of a single region or city”, he adds.

According to studies commissioned by POT, in the course of the third edition as many as 87% respondents indicated that they “greatly benefitted” from participating in the campaign, and 86% announced that they would take part in successive editions. Almost 80% industry partners joining the campaign would be willing to recommend other tourist entities to apply for successive editions. From its inauguration in 2016 the campaign attracted the attention of 250,000 tourists.